AIRHOGS HOLD OFF SAINTS IN SLUGFEST 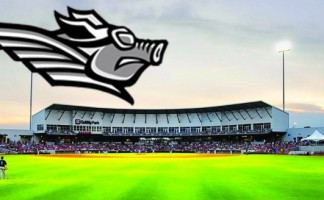 A five-run first and four-run fourth provided enough of a boost for the host AirHogs as they held off the Saints in an 11-8 slugfest. 1B Devon Rodriguez drove in two of the five runs on a two-RBI double in the first inning, and later added an RBI single in the fourth. The big blow of the fourth inning came when SS Juan Sanchez hit a three-run homer, his third long ball of the season. 3B Austin Gallagher added two more runs on a two-RBI single in the eighth.

Rodriguez finished 4-for-5 with three RBI, while Gallagher was 3-for-5, also with three RBI. RHP Palmer Betts earned the victory for the AirHogs, striking out six over six innings.

St. Paul had 11 hits of their own, including three from CF Alonzo Harris. RF Breland Almadova and 1B Angelo Songco each homered for the Saints.

Wichita faced a 6-4 deficit heading the eighth, but the Wingnuts rallied with three runs in the game’s final two frames for a 7-6 win over the T-Bones. CF Harrison Kain reached on a fielder’s choice for the eighth inning’s first run, and an RBI single by SS Leo Vargas tied the game. An inning later, 3B Zack Cox drew a leadoff walk, went to third on a wild pitch, and scored on a sacrifice fly by DH Brent Clevlen.

Vargas’ clutch single was one of three hits for him on the night, a team high. He also hit a two-run home run in the top of the second. Clevlen had a homer of his own, a solo shot in the third. LHP Frankie Reed tossed two scoreless innings of relief for the win for Wichita.

SS Vladimir Frias went 3-for-5 for Kansas City, and CF Tyler Massey had two hits, including his fourth home run of the year.

The Saltdogs hit a pair of solo home runs in a 3-1 home win over the Canaries. RF Curt Smith opened the scoring with a solo home run in the bottom of the first, and 3B Christian Ibarra hit a long ball of his own in the fifth. In between, SS Pat McKenna collected an RBI single in the fourth, scoring LF Brandon Jacobs, who had tripled. Jacobs and Ibarra both finished the game with two hits apiece.

On the mound, RHP Lindsey Caughel struck out seven in seven innings of work, earning the win. RHP Evan Reed fanned two in a scoreless ninth for the save.

C Michael Pair had two hits for Sioux Falls in the loss.

The RedHawks broke a scoreless tie in the top of the sixth and topped the RailCats on the road, 3-1. LF Keury De La Cruz came up with RF Chad Mozingo on third, and De La Cruz drove home Mozingo with an RBI single. An inning later, it was Mozingo’s turn, as he singled home C Ryan Wagner. A sacrifice fly by CF Kes Carter in the ninth gave Fargo-Moorhead an insurance run.

RHP Tyler Herron was masterful for Fargo-Moorhead, striking out 11 on just four hits and two walks over eight innings, earning the win. RHP Colton Reavis worked around a walk while striking out two for a save in the ninth.

For Gary SouthShore, DH Cameron Newell had an RBI single, his ninth RBI of the year.

The Goldeyes scored six runs in the top of the first and never looked back, toppling Sioux City on the road, 11-1. RF David Rohm opened the scoring with a bases-clearing double in the inning, and would score himself on a two-RBI triple by 3B Wes Darvill. 2B Casio Grider drove in one more run on an RBI double. In all, Winnipeg finished with 18 hits, five by Rohm. Rohm’s 5-for-5 night included five RBI as he had a pair of RBI singles in the fourth and fifth innings. Five other players had two-hit nights for the Goldeyes.

RHP Edwin Carl worked seven innings, allowing one run on four hits and striking out seven, earning the win for the Goldeyes.

C Ralph Henriquez had two hits for Sioux City in the loss.

LF Ty Morrison singled home RF Reggie Wilson for the Lemurs in the bottom of the seventh, and Laredo held on for a 2-1 home win over the Blasters. Laredo had previously gotten on the board on an error in the second, only to see Joplin answer with an RBI single by CF Ronnie Richardson in the third.

The Lemurs had just four hits in the win, two by Morrison. RHP Kyle Winkler retired all six hitters he faced in the sixth and seventh to earn a win in relief. RHP Jeff Inman kept Joplin off the board in the ninth for the save.