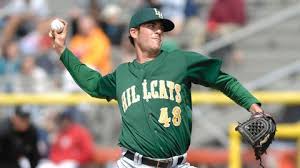 James Hoyt continues to post the most dazzling statistics, but he is far from the only recent American Association graduate continuing to work his way in the top two tiers of the affiliated minor leagues toward a possible major league debut.

Hoyt is the co-leader in saves in the Pacific Coast League (10 in 12 opportunities) although it is his strikeout and WHIP (walks + hits per inning) numbers that really set him apart in the Triple-A league. Closing for Houston’s top farm club in Fresno, the 29-year-old has not allowed an earned run in his last nine appearances while winning twice, saving three games and striking out 18 hitters in 10.1 innings. Hoyt (Wichita) has allowed only 14 hits and eight walks in 26 innings for the season while posting an 0.85 WHIP, winning three of five decisions and posting a 1.73 ERA.

Corner infielder Balbino Fuenmayor (Laredo) has really heated up at Omaha, Kansas City’s top farm club, hitting .378 (14-for-37) his last 10 games to lift his season average to .284 with a .333 on-base percentage. He has two homers and 15 RBI in the comeback from serious injury the second half of last season, and could become a candidate for the Royals as they seek fulltime replacement for the offense lost through a season-ending ACL injury to third baseman Mike Moustakas.

Last season’s Starting Pitcher of the Year, Patrick Johnson (15-1 at Sioux City), has moved into the starting rotation for Miami’s Double-A team in Jacksonville, and the 27-year-old turned in his strongest showing the last time out. He hurled six shutout innings against Mississippi, giving up but four hits without a walk and striking out five. The right-hander (2-1) has lowered his earned run average by more than a full run per game from 5.94 to 4.72 in his four starts.

Cody Satterwhite (Sioux City) may be making a believer out of his new bosses, the Los Angeles Angels, because of the right-hander’s work at Triple-A Salt Lake. Satterwhite has a 3-1 record and 1.96 ERA despite giving up three runs Monday, and has allowed only 18 hits and seven walks in 23 innings.

“He just attacks the zone,” manager Keith Johnson told The Orange County Register. “He’s a bulldog out there. He’s not afraid to throw the ball inside, and he just makes his pitches. The biggest thing he does is get strike one. When you get strike one, I don’t care who the hitter is, you can get them in swing mode and then you can try to expand the zone a little bit. He’s been solid for us all year.”