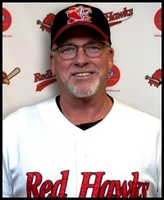 In his first season with the RedHawks in 2019, Jim Bennett led the club to a 12-game improvement and its first playoff berth in six seasons, earning Manager of the Year honors in the process.

Signed by the Seattle Mariners in 1988, the California native pitched in the Mariners’ and San Diego Padres’ organizations for three years, reaching the High-A level. His pitching career ended in 1991 as he played for Fiorentina in Italy’s Serie A2, going 5-3 with a 1.23 ERA.

Bennett began his coaching career in 1992 and spent the next 16 seasons coaching in the California/Anaheim Angels, Oakland Athletics, Colorado Rockies, San Diego Padres and San Francisco Giants organizations. In 2015, Bennett was named the pitching/bench coach for the Brisbane Bandits, of the Australian Baseball League, who won four consecutive ABL Championships.