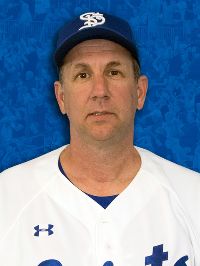 George Tsamis begins his 18th year as manager of the Saints and 22nd overall. He has a career managerial record of 1106-897 (.552 winning percentage) and has won four championships, including St. Paul’s first American Association title in 2019.

Tsamis, 49, was drafted in the 33rd round by the Toronto Blue Jays after his junior season at Stetson but elected to stay for his senior season. He went 11-3 with a 2.48 ERA in 1989 and the Minnesota Twins were impressed enough to draft him in the 15th round. On April 26, 1993, Tsamis made his major league debut versus the Milwaukee Brewers. He pitched in 41 games for the Twins that season compiling a record of 1-2 with one save.

Following his nine-year professional playing career where he registered a 57-31 minor league record, Tsamis became the pitching coach of the Waterbury (Conn.) Spirit in the Northeast League and was promoted to the managerial role in 1999.

He spent two years there before moving to New Jersey in 2001 where he went 107-72 in the regular season and defeated Winnipeg in the league championship series both years. In 2004, his club rallied past Schaumburg in five games to win the Northern League Championship.